Sound of dombra, people frozen in anticipation, leather surface as flat as the steppe itself, and a small wooden figure of a mountain goat, tied to the puppeteer musician by a single thread, began to beat out the rhythm with its tiny hooves. This action, fascinating with its magical simplicity, is known among the Kazakh people as "Orteke", which is fancied by both children and adults.

Some people say orteke is a street theatre, others might claim it is a musical instrument, some would see it as a decorative art, and children perceive it as a toy and use for entertainment. The truth is that all of the statements are correct, orteke is everything altogether. It is an indigenous Kazakh performing art that combines theater, music, and puppetry. You may notice it from the introductory words of one of the masters in the video. He did not give single-worded description of orteke, because it is simply impossible.

If we analyze it semantically, the word “orteke” derives from “or”, pit, hole or trap, and “teke”, goat. Therefore “orteke” is both, the name of the wooden figurine of a mountain goat itself, and the name of a musical-puppet genre as a whole. Figurines of other animals and even people could be used in orteke performances, but it was the goat that became the symbol of this specific nomadic art and gave its name to it. Orteke is steadily associated with dombra kuy, sound of which is used as the background melody throughout the entire video. Dombra is one of the most fancied traditional instruments of Kazakh people, and it is very common to find it in every household even nowadays, no matter if someone plays it or just keeps it as decoration. Although orteke is associated with dombra, puppets can be driven with the help of other musical instruments as well. Regardless of the instrument, the principle of orteke is same: they are controlled through the thread tied to the musician's fingers, and when the musician starts playing, orteke makes rhythmic movements to the beat of that melody.

Children find the figurine of a dancing goat very funny and amusing, while adults see the deeper meaning in it. In order to understand that meaning and properly digest orteke performance, let’s have a glance at its origins. Legends associated with the origins of orteke are about the story of the teke (goat) trapped in a pit and making unsuccessful attempts to escape from it. This comic dance was born on the basis of observations of the animal habits, and has a playful and humorous nature. It also mocks the actions of the people who, through their foolishness and negligence, have fallen into a ridiculous or hopeless situation.

Such holes are made around the hay stack so as not to be destroyed by livestock or wild goats. When animals fall into those holes, in fright, they run in a circle, jump, twirl, and look for the ways out. Basically, they make masses of meaningless movements. Those animals begin rushing even more as someone appears. Useless attempts to free themselves amused people. Hence, many believe that the dance of a puppet goat demonstrates the movements of a trapped or hunted animal.

However, orteke does not necessarily represent the hunting process or wounded animals. In fact, in the traditional Turkic culture, hunting for such animals was strictly regulated, and even if they were hunted down, there was a ritual of asking for the forgiveness before killing them. Thus, orteke's hunting nature may certainly be one aspect, but by no means the most defining. Rather, orteke reflects a deeper mythical process that constitutes worldview of the ancient nomadic culture of Central Asia. From this viewpoint, orteke can be interpreted as an earthly projection of the act of Creation. For example, just as in some belief systems gods created the world through dancelike movements, or shamans used dance in their healing rituals, orteke is believed to be that special being that creates “Something” through its ritual dancing. When you watch the performance, be it in person or through the recorded video tape, you may feel some magical aura around it, and it definitely gives the audience some food for thoughts.

Peculiarities of Making and Performing Orteke


If in the classical puppet theatres, the actor leads the puppets directly himself, then in the ancient Turkic puppet art, the musician leads the figurines indirectly through the instrument (material aspect), and his music (intangible level). While watching the video, pay attention to the hands of the musicians, where you can see that most, if not all players are leading with their right hand. Even in their talks, they casually say: “… make sharp movements with your right hand…” as if everyone is right-handed. It is not a simple coincidence, but related to the belief system and religion. The predominance of left hand was considered a deviation from the norm, and in the old days left-handers were forcibly retrained in their childhood. 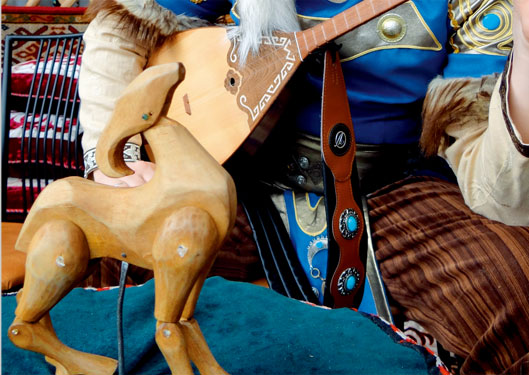 Degree of realism and believability of orteke’s movements depends not only on the musician’s hand striking and overall performing skills, but also on the skills of an applied artist – master of wood carving. In the video they displayed the easiest way of making orteke step by step, yet it still looks very sophisticated. Orteke's joints should be very mobile so that he can walk, tap his hooves and jump almost like a real mountain goat. Speaking of the wood used for making orteke, craftsmen use different types of tree, but mostly prefer birch. This tree is widely used in everyday life, and it has special meaning for nomads. There are many poems and folk sayings dedicated to the birch tree.

The surface that orteke dances on is usually round or square leather membrane. The shape of the pedestal for the puppet is deeply semantic. The circle is a projection of the Earth as a celestial body, in this case “shanyrak” and “yurt”, known as nomad’s traditional house, a symbol of a personal little space of each family. The square shape is interpreted as the four corners of the world. Interesting is the opinion of some masters that there was a tradition where people preferred using a round membrane for rituals, and square ones for play and fun.

Throughout the video there are both, individual musicians and bigger ensembles delivering orteke performances. One can notice that whenever there is an individual player, he mostly uses dombra, whereas ensembles deliver the harmony of wide range of instruments and they may choose different types of animals suitable for their instruments.

Not all kuys are applicable for orteke. Musicians most often choose dynamic kuy, and should have sharp hand movements to give the necessary impulse to the wooden puppet through the tied thread. Melodies should offer a room for a dance. As it is displayed in the video where two kids come forward and dance, sometimes orteke performances are accompanied by traditional dancers. Main highlight of the video is perhaps the last ensemble’s performance, which accurately displays orteke art and spirit of Kazakh people. The fact that they play outside in the open steppe is something that Kazakh people as nomads cherish most. Wide steppe is regarded as a special boundless space that connects heaven and earth. The colour of their costumes represents humbleness and earthly features, while embroidered patterns and attached jewelries represent prosperity and spiritual wealth. Musical instruments are perfectly complementing each other and together they are delivering one of the finest kuys.

Importance and Cultural Value of Orteke in Modern Kazakhstan

Today, orteke is an important part of the region’s folk heritage and national identity. Orteke was almost forgotten, and it only survived because few master craftsmen and puppeteers preserved the tradition and passed it on. Today, the traditional Orteke started growing its own audience. There is an annual government-funded festival “Orteke” held in the country’s south capital, Almaty. Nevertheless, orteke still remains as mysterious art, and it needs revitalization and further promotion since it represents a wide platform for traditional Kazakh culture, where one can understand the spirit of Kazakh people and syncretic nomadic art.

Many traditional games have been lost along the way, and it is well known that games can facilitate communication between parents and children. Hence, orteke also reveals intergenerational communications. Moreover, it has an educational meaning where adults teach the youth basic techniques of playing or constructing orteke. Therefore, it is not solely a musical performance, but a theatrical art and an educational work.

Overall, orteke organically combines the sound of dombra, the dance of a goat, the vocals of a puppeteer musician. In addition, the figurine itself can be a masterpiece of an applied art. At first, it might be difficult to imagine how it all works in practice. But it is worth seeing at least once, and orteke will certainly make a strong impression on the viewers of any age.

Assonova A.
“The sacred goat, or the meditation of the nomads”, Kursiv, Sept. 2010, available at https://kursiv.kz/news/2010-09/sakralnyy-kozel-ili-meditaciya-nomadov