The Cultural Space of Boysun
[ English ]

The Cultural Space of Boysun

The Cultural Space of Boysun District: Where Tradition Remains Present and Quotidian

Boysun District, located 600km away from Tashkent, the capital of Uzbekistan, is encompassed by towering gorges and valleys in all directions. It is necessary to pass through this precipitous yet dramatic spectacle, irrespective of whether you proceed northwards from Termez, the country’s southernmost city bordering Afghanistan, or travel southwards from Tashkent. Encircled by lofty gorges and majestic valleys, Boysun had long been isolated due to its natural surroundings, which made access difficult.
The region was originally known as one of the first areas to be inhabited by humans, and also flourished in the heyday of the Silk Road. However, since the emergence of the maritime Silk Road, the overland Silk Road lost its appeal, and the Central Asian region also lost its role as a trade and economic hub.
As a result, residents of Boysun found themselves in a social environment of isolation and exclusion in terms of traffic and exchanges with the outside world. They became isolated as a society and saw few visitors, walled off by rugged gorges and valleys. Ironically, such seclusion and severance served to shelter Boysun’s ancient heritage from damage. As such, tradition that exists only as memories in the outside world remains present and quotidian in this district.
Boysun is a place where it is possible to feel and experience the traditional culture of Uzbekistan that has been passed down through time and space since antiquity. Recognizing the need to preserve such cultural and historical value, Boysun was inscribed on the UNESCO Representative List of the Intangible Cultural Heritage of Humanity in 2003. The Uzbek term Boysun viloyat madaniyati (Бойсун вилоят маданияти) means “the cultural space of Boysun District.” In the context of intangible cultural heritage, “cultural space” refers to the domain of life shared by its practitioners and the physical domain where the transmission of the relevant cultural heritage is practiced. Therefore, the cultural space of Boysun District, based on the community, is a living heritage in itself and highly recognized for its value.  In the course of being transmitted from generation to generation, the traditional heritage that inhabits the cultural space of Boysun District has changed or disappeared, or occasionally recreated itself in new forms. The spiritual culture and lifestyle that have become infused into the lives of the Uzbek people over thousands of years are now a part of their everyday life.
Central Asia was the birthplace and center of Zoroastrianism before the dissemination of Islam. The Zoroastrian scripture, the Avesta, formed the bedrock of the spiritual culture of all Central Asian peoples, including the Uzbek people. In Boysun, vestiges of various religions, encompassing Zoroastrianism, the ancient Turkic religion of Tengri, Buddhism and Islam, are intertwined and fused into everyday life.
In Boysun, a new year starts with Navruz. Navruz is a new-year event of Zoroastrian origin that is intended to celebrate the coming spring. Every year, March 21st is celebrated as the day when spring begins in full bloom after the long winter. As such, this festival represents hope and peace. On the eve of Navruz, Boysun residents light a bonfire to pray for good fortune. During the Navruz festival, people enjoy the festive atmosphere and celebrations with a variety of traditional games, including a wide array of entertaining events and performances, such as kurash (folk wrestling), kopkara (horse racing), tug-of-war and puppet shows. 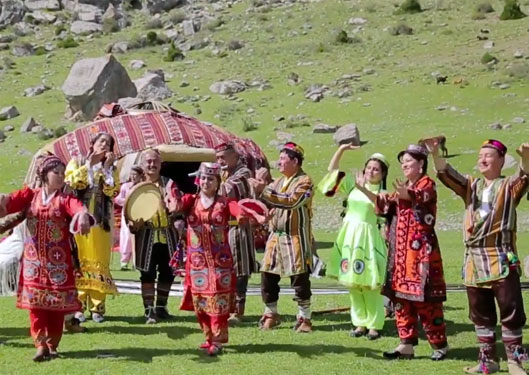 Music and dance performances are indispensable sources of joy and everyday delights for Boysun locals.

In addition to the new-year festival of Navruz, the locals pass down folk songs sung at work and ceremonial occasions (e.g. coming of age, wedding, funeral, and ancestral rites). In this process, storytelling musical performers known as bakhshi serve as a medium that links generation to generation and region to region. From ancient times to the present, bakhshi have served to pass on the worldview, lifestyle, history and folklore of the Uzbek people to successive generations. In eras prior to the invention of printing and type technologies, they had a principal role in delivering moral lessons and education to younger generations, as well as oral documentarians of history. Through the bakhshi as conduits of memory, the Uzbek people learned about their ancestors’ lives and wisdom. Moreover, through their music, Uzbeks learned their traditional leisure and festive activities, transforming their everyday life into a festive arena filled with music and dance. This tradition remains alive in Boysun, a place where tradition has been fused into modernity.

Boysun is also renowned for the quality of its spring water. Approximately 82,000 Boysun residents live on lifesaving water drawn from Boysun’s natural basin.
However, this water is not only used by local residents. Boysun’s mineral water is widely known for its healing and medicinal effects. Among other sources, the Omonkhona mineral spring has a shelter where people can drink the mineral water and rest, along with sanatoria where the sick can be healed in a type of care facility.
In the cracks of the gigantic rocks that form the gorges in this region, visitors rest on wooden benches, bathe in the mineral water, drink tea and converse with one another. The sanatoria, intended for those suffering from pain in their body and mind, supplement the healing properties of Boysun’s mineral water with the robust beauty of its surrounding nature. In Uzbekistan, a country without abundant water resources, Boysun is a place of rest and healing for the body and mind amidst the flowing mineral water, as well as an idyllic location for agriculture and stockbreeding. It was because of this ability to be self-sufficient and independently procure all resources required for their livelihoods that the residents of Boysun were able to sustain themselves without relying upon the outside world.
In Boysun, almost all goods required for everyday life were independently crafted within each household. The need to personally manufacture farming equipment for agriculture and stockbreeding, as well as everyday goods, led to the development of metal craftsmanship in the region. Moreover, Boysun’s textile and leather craft industries expanded as materials such as carpets, felts and hides were easily available from the stockbreeding sector. During off-seasons for farming or leisurely times, women manufactured textile, leather or embroidered goods. From early childhood, they learned embroidery or craftsmanship from their mother or grandmother, instead of reading and writing. They would spend their days in a workshop learning handicraft skills, acquiring skills to make a living, not only for themselves but also their family.
Over centuries, artifacts that embody Boysun women’s struggle to make ends meet have gained fame abroad for their unique aesthetic, robustness and durability, including textile, embroidery and porcelain artifacts. Vases and plates that reflect local traits and history were a significant source of income in the heyday of the Silk Road. These famous artifacts continue to comprise a large portion of income for local residents in Boysun.
The lifestyle of the people of Boysun, which they have pioneered and developed by adapting to nature and social circumstances, has established itself as a tradition and a cultural space of intangible cultural heritage that fuses together the Uzbek people’s religion, folklore and arts in a living communal space. The lives of Boysun residents bear deeper value as they do not represent the past or memories that are often typified as tradition, but rather the living, breathing embodiment of everyday life in the present. Ensuring the longevity of this living entity is a task to be undertaken by all of us.

Contributed by Dr. Eunkyung Oh, Director of Institute for Eurasian and Turkic Studies